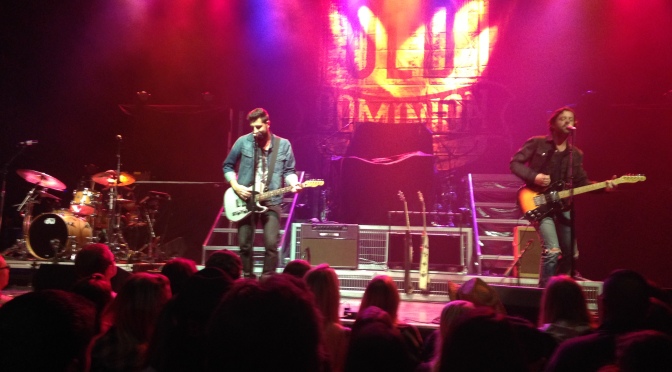 Old Dominion isn’t doing things the traditional way. They’ve yet to sign a record deal, yet have already scored two number one hits on SiriusXM The Highway. They’ve never gotten any promotional help, yet they’ll hit the road this summer with Kenny Chesney. Today, they changed things up again when they released “Break Up With Him” to national country radio.

The song was never supposed to make its way to national radio. However, as the group toured the country with Chase Rice more and more fans began asking for it. Eventually radio program directors had no choice but to give in and play the song that listeners demanded. Ed Hill, a program director for a CBS Radio station in Seattle, had this to say of the tack, “I’ve never done this before: Hear a song that’s not a single and just go put it on the air and pound it.”

As the song continues to be added to stations across the country Old Dominion will become more well known. Something that the group and Kenny Chesney can get on board with. It’s unknown when the  group will release it’s debut album, but it’s safe to say it’ll be a good one. Their debut self-titled EP was produced by Shane McAnally who’s one of the most sought after producers in all of Nashville.

Fans can see Old Dominion as the first act on the bill of Kenny Chesney’s The Big Revival Tour at Gillette Stadium on August 28 & 29.