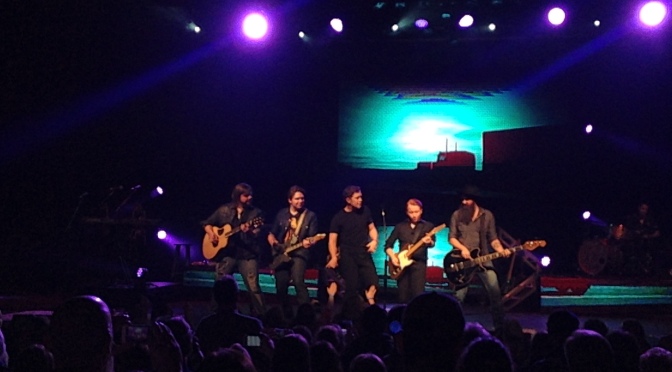 Scotty McCreery brought his See You Tonight Tour to the Toyota Oakdale Theatre in Wallingford Connecticut last Thursday. The show served as a fundraiser for the 12.14 Foundation, which supports Sandy Hook after the tragedy that struck the community in 2012. With Danielle Bradbery along as the opening act the show was able to raise slightly over sixty thousand dollars. Despite all the money raised it was McCreery and Bradbery’s performances that everyone was talking about on the way out.

Big Machine Records recording artist, The Voice winner, and ACCA nominated female vocalist Danielle Bradbery kicked things off with “Yellin’ From the Rooftops.” The powerful vocalist was quick to show off her ability to engage the audience while flawless moving through a number of her original songs. Bradbery shined brightest perhaps during her covers of Katy Perry’s “Roar” and Carrie Underwood’s “So Small.” Both tracks fit Bradbery’s voice perfectly, allowing her to show off her ability to hit a wide range of notes. Bradbery finished things off with her debut single “Heart of Dixie” before turning the stage over to fellow youngster Scotty McCreery.

Scotty McCreery gained fame in 2010 upon winning American Idol. He’s since added a platinum album and three platinum singles including his most recent “See You Tonight.” The talented vocalist made a name for himself through his ability to sing both classic and pop country. His cover of Josh Turner’s “Your Man” has been played on YouTube over four million times. At just 21 years of age, McCreery has been performing on stage for over five years and it showed on Thursday night. His high energy helped him connect with a crowd that included members of all ages. He opened his set atop the stage with the up tempo “Now.” That was all the time it took for the crowd to raise to it’s feet where they would remain for the majority of McCreery’s hour and a half set.

Shortly after he performed the first of his three platinum hits, “The Trouble With Girls.” It was here that McCreery noted that girls will come up to him regularly and scold him for the song having negative connotations, yet he clarified that the song aims to highlight his love for women. He followed that up with a number of classic covers including, the George Strait classic “Check Yes or No” and Garth Brooks’ “Mama Was a Looker.” His ability to perform some of country’s most recognized songs at a high level is perhaps his best ability. This allows him to connect with another generation of fans, thus increasing his popularity outside of the teen demographic.

McCreery then slowed things down to talk about the importance of the night. As the national ambassador for the 12.14 Foundation McCreery made it clear that he cares deeply about ensuring music and the arts play a role in community’s across the country. He perform his song, “The Dash” which talks of losing someone to soon and connected it back with the tragedy that struck Sandy Hook. Despite, never being released to radio the song is perhaps McCreery’s best work. Not only does it show is softer side, but it also shows his ability to tell a powerful story through song. Much of the crowd rose to their feet and gave McCreery a standing ovation for his performance and charity over the past couple of years.

He wrapped things up with his current single “Feelin’ It” and recently named platinum single “See You Tonight.” As inflatable beach balls were launched into the audience, McCreery paused to let out a smirk of his own. His fun loving side was on full display as he ran about the stage kicking any balls that came up on stage back into the audience. As he exited the stage the audience clapped and cheered on an artist many of them consider to be one of their own. McCreery’s work in the community has been widely respected by the Sandy Hook community and this was their way of paying him back.