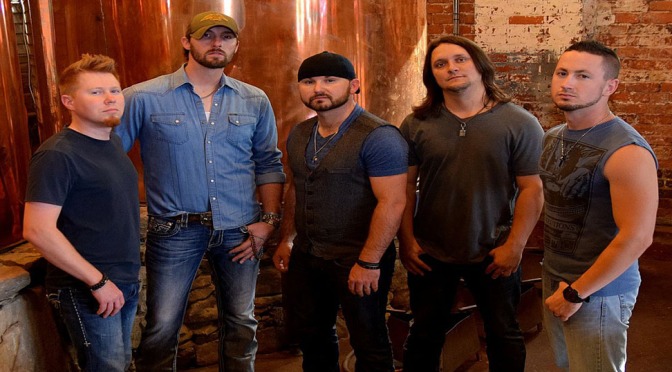 If you listen to SiriusXM The Highway then chances are your familiar with Outshyne. The “Moonlight Crush” and “Night With Your Name on It” singers are gearing up for bigger and better things in 2015. They’ll be out on the road for much of the year hitting places they’ve never been, including the Northeast. We chatted with lead singer Waylon Owings this week about new music, 2015 plans, and quitting their day jobs to pursue music full time. 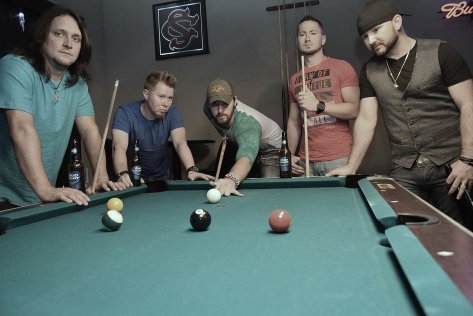 I know you guys have been in the studio recording. What can you tell us about new music?

We were in Nashville a couple days ago working on what I believe is going to be our new single. It’s called “Ain’t.” We’re hoping that this is going to be even bigger than “Moonlight Crush.” This one was written with David Allen Burns which is one of the guys I write with the most. He’s a good friend of ours. It’s a killer song. I’m not exactly sure when it’s going to be released to radio, but it definitely will be our next release.

Moonlight Crush stayed exclusively on SiriusXM is this one going to make the shift to national radio?

Yeah that’s what we’re working towards. We’re trying to get everything on national from here on out. We’re working with some new radio promotes and a new team. So we’re hoping to go that direction with this one.

Definitely. Does the success you had with “Moonlight Crush” and “Night With Your Name on It” give you guys a sense of confidence going forward?

Yeah it kinda made us wake up a little bit and made us realize that people are starting to discover who we are. Those songs have been so good to us. We started out being like a bar band, where you play a couple of your tunes and a lot of covers. But now we’ve realized that people wanna hear our music they don’t wanna hear covers. ‘They’re like play your stuff. We wanna hear your stuff.’ So being on SiriusXM The Highway has helped us out so much, with so many downloads and we have people all over the states. Everywhere we go there’s so many people that know our stuff and it’s a great feeling.

But it does kind of show us that we’re gonna have to step it up on the next one – really make something even better and that’s what we’re trying to do with this next one. We’re hoping it’s the one and I think it is.

I know you guys did a lot of writing with the guys of Florida Georgia Line, Cole Swindell, and Rodney Clawson. Are you guys writing with a lot of the same people this time around?

I mean if Rodney has a song he wants to send over we’ll definitely take a look. He’s awesome. But we’ve got a couple guys pitching us stuff, and we’ve done some writing ourselves too. So we’re doing a little mixture of both, but we have some new guys on board this time. My buddy David Allen Burns and I have been doing a lot of writing together because I like his style and when we write together it seems to come out to the sound I like.

But the new stuff is totally different from our last album. It’s going to be a treat for everybody to hear the new style of everything.

Do you have a tentative release date for anything?

Management hasn’t told me anything yet, but I’d think within a month it’d be ready to roll.

So around the first of the year.

Yeah, but if it can be done any sooner they’ll let me know. I don’t know a whole lot on it. They don’t tell me half the time until the last minute and I’m just like ‘great.’

Besides the new music do you have any tour information for 2015? Some dates have already been released, but do you have any insight on what you’ll be doing towards the summer months?

We signed with Buddy Lee Attractions a couple months ago and that has got us on the road now. We’re gonna be all over the place. We’ve had tons of fans on social media that are always wondering why we aren’t playing in their states. That’s because basically everything that we’ve done had been done by us. But now we’ve got Buddy Lee on board and they’re putting us everywhere.

We’ve got our new sponsorship with Palmetto Moonshine. It’s local moonshine company down in South Carolina. It’s the first legal moonshine distillary. So we have all that going on. We’re actually doing a new thing called a meet and drink. We bring however many VIP out to the bus and hang out and give them a shot of the Palmetto Moonshine.

There’s a lot of stuff that’s going to be going on, but they don’t tell me everything. Guess they don’t want me to get too excited.

Sounds like you guys have a lot in store.

You guys have a couple dates in the Northeast coming up. One in Vermont on New Year’s Eve and then one on Long Island a few days later, will that be your first time up here?

I think a lot of people will be excited to hear you’re coming up this way. Lots of people who hear you guys on Sirius and then look and see if you’re playing up here are disappoint to see you haven’t been.

Going back to the beginning for a second, when did you guys realize that you could make a living out of making music?

Well we always dreamed about it- it was something that we wanted to do, we just didn’t know how to go about doing it. Luckily, we’ve made connections with a lot of the right people. We met a guy who got us with our manager and he helped us record our first album in Nashville. And so he was like, ‘ I want to do my best to get you guys out of working your jobs, so you can do this full time.’ And we were sort of hesitant, but he was like give me some time. So sure enough a couple months go by and he comes to us and says, ‘I know this is gonna sound scary, but are you all ready to quit your jobs?’ And for me I didn’t wanna lose my house and everything I got. But he showed us some figures and we did it.

But I’m not gonna lie to you we were terrified the first couple of weeks. I was thinking I was gonna lose everything I got. But everyone supported us, and now it’s a job but it’s something I enjoy doing so it’s a great feeling.

And lastly do you have any tips or advice for people looking to make it in the music industry?

We’ve learned so much from doing it ourselves – really hands on. So I’d say you don’t have to move to Nashville, but it does help out a lot. The one thing you do have to do is get in with writers, start writing. You wanna meet people, it’s all about meeting the right people in Nashville.

Writing is the most important thing when it comes to getting a deal. Getting a publishing deal is usually what comes first, because if you can get that you’re gonna get recognition from labels and other artists. A lot of people think you just go get a record deal, but they don’t know anything about music. People will ask us, ‘Why aren’t you with a major record label?’ and my answer to that is that right now we don’t need one. We’ve had a few offers, but nothing that was a real perfect fit. So that’s what I would say. Communicating and meeting the right people is really the way it works.

All good advice. Well thank you so much for talking with us and best of luck in 2015.

Their singles “Moonlight Crush” and “Night With Your Name on It” are available for download now on iTunes.