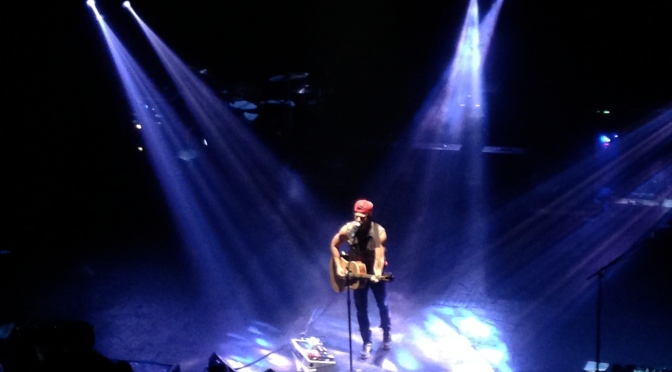 The Orpheum Theater was the place to be for country fans in the Northeast on Friday night. Kip Moore rolled into town to headline the Up in Smoke Tour sponsored by CMT. It was Moore’s first trip back to Boston in over a year and he treated his faithful fans well with nearly two hours of guitar heavy country music. It was Sam Hunt and Charlie Worsham who warmed up the sold out crowd each showing off their unique country sound.

Hunt’s rapid ascent to country music stardom put him in an interesting position as the first act on stage. Despite his debut single “Leave the Night On” going platinum and spending a week at number one the Orpheum Theatre was only about 75% full when Hunt took to the stage. Kicking things off with “Raised On It” it was clear that those in attendance were very familiar with more than Hunt’s radio offering. From there Hunt played the remainder of his debut EP X2C as well as his newest radio single “Take Your Time.” As people continued to stream into the Orpheum Theatre Hunt found fans in all of them. His music is built for live performances – catchy lyrics combined with dance friendly beats Hunt had the venue moving.

However, that’s where the positives stop for Hunt. He’s only been performing live for about a year and it shows. His vocals are average at best, something that he’d be more likely to get away with if he had a fuller sound. Instead, his band is comprise of a drummer and two guitarists. The bass and keyboards are all done electronically with the use of loops. That can work on recordings, but when it comes to live shows it leaves the sound feeling slightly empty. Additionally, Hunt’s “rhythm” guitarist stuck solely to power chords. So for better or worse Hunt’s sound came from a lead guitarist, drummer, and electronic loops. Again, this isn’t necessarily a problem for a half hour set, but when he hits the road to headline his Lipstick & Graffiti Tour in a couple months it will be.

Next to the stage was Berkley College of Music graduate Charlie Worsham. Like Hunt, Worsham’s success was relatively over night. His debut single “Could it Be” reached the top 15, but since he’s been relatively quiet. However, once on stage he’s anything but quiet. Guitars reign supreme with Worsham who plays lead on most songs. If Worsham career ever fully fizzles out he’ll have no problem finding work as a guitarist, he’s that good.

However, that shouldn’t be the case. His nine song set featured two covers including the sing along friendly Bruno Mars hit “Treasure.” But it was his original stuff that stood out. Along with “Could it Be,” Worsham performed his other radio single “Want Me Too.” Upon hearing it live it’s difficult to understand why it sruggled to gain radio traction. The catchy lyrics and smooth guitars suit Worsham well, who like Hunt is really nothing more than an above average vocalist. He hides it better though, his guitar playing and high energy attitude stole the show as he even ventured into the crowd to pose for pictures and sing along with his biggest fans.

After a short wait it was Kip Moore’s turn to take the Orpheum Theatre stage. Moore, who revealed during his set that the past year had been tough on him has made news within industry circles due to the delay of his sophomore album. It’s one that fans have been waiting on for over a year and one that Moore himself has been waiting on for months. “I wanted to make a record with meaning, that makes you feel something in your soul and in your gut,” said Moore of the highly anticipated release. The delay didn’t stop him from performing multiple songs that will be included on his next record including radio single “Dirt Road,” and Souncheck songs “Heart’s Desire” and “Come and Get It.” All of the new material resonated well with the Boston crowd, who despite not knowing the words had no problem dancing along.

The remainder of Moore’s set featured songs from his debut album. Highlights included a feisty rendition of “Reckless.” It was here that Moore told the fans the well known story of his first shot at a record deal. Unwilling to become someone he’s not, Moore recounted an unnamed record producer telling him his songs would never find radio success. Now three number ones later it’s Moore who got the last laugh.

He stripped things down for a heartfelt version of “Everything But You.” Despite, never being released to radio much of the sold out crowd knew every word. Without the band to support him Moore’s raw vocals become much more prevalent. It’s a sound that’s not for everyone, but for his fans it’s the best sound in the world. The raw emotion injected into every song allows for a real connection with the audience.

There was a two way tie for the loudest moment of the night. The first occurred when Moore welcomed Sam Hunt back to the stage for a cover of the Hunt penned “Cop Car.” The few hundred fans who missed Hunt’s set rose to their feet and cheered as Hunt took the lead for four brief minutes. Despite Hunt’s popularity it was likely Moore’s first number one hit that stole the show. As the unmistakable guitars blared through the amps the Orpheum Theatre began to scream. After the first chorus the second deck was literally shaking as fans belted out every word of the platinum single. Moore thanked the Boston crowd, wrapped things up, and let his band, The Slow Hearts, take the crowd home.

For Sam Hunt it was the electronic loops and lack of bassist that stood out. For Worsham, it was his high level guitar playing that stole his portion of the show. And for Kip Moore it was his real connection with the audience. His ability to pour his heart and soul into each song in a genuine fashion is something that many artists struggle with, yet he excelled throughout.