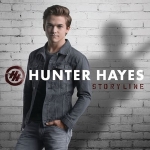 After the success of “Wanted,” “Somebody’s Heartbreak,” and “I Want Crazy” off his first, and self-titled album, Hunter Hayes went back to making music and came back with one of the most emotionally charged country songs in recent memory: “Invisible.” Invisible, the first single off of his sophomore album, Storyline, talks about his struggles with adversity, specifically bullying. Because of this, Hayes performed it at the Grammys garnering both a rousing applause and an increased amount of interest around him and his music. Now, with his second album out, it is clear that Hayes is poised to make waves in the country music industry.

As much like his debut album, the ideas of love and heartbreak are prevalent among the record’s emotional highs and lows. The up-tempo love songs, specifically “Tattoo” and “Storyline,” convey the same ideas of “I Want Crazy,” yet have a cleaner and poppier feel to them. The heartbreak songs, such as “You Think You Know Somebody,” also mirror elements of what was on his first album, but again have a different feel. In both cases he seems to have matured as an artist and is more comfortable with who he is as an artist. He will never be the stereotypical new-age country singer. He will never look back on Friday night football games, mud tires, and bonfires, mainly because he doesn’t come from that background. That is what makes him so intriguing as an artist. He breaks out of the the mold and is making music his own way. This is seen throughout the album where instead of falling into the mainstream country style of using hip-hop influences, he instead opts for a cleaner, more musical, more melodic sound. He is clean-cut, almost to a fault, but he stops short and finds a way to still be a big-time country artist who does it his own way. As much as you could say that he is the anti-Eric Church, he is also strangely similar to him with his rebellious attitude toward the way he is looking to make music. Church conveys that he is an “outsider” by using hard-guitar riffs and rock influences, Hayes goes back to “pure” music and uses his talent to take him to success. The clean-cut music and solid songwriting are what make this album so special and so high in quality. A country music purist can take solace in the fact that a young artist still holds onto original country musical values, while a casual fan can find crossover enjoyment with songs like “Flashlight” and “Invisible.”

Overall, this album does something that few today find a way to do: balance the old and the new. For that reason I recommend this album to anybody who is a fan of music in general and especially to anyone who considers him/herself a country fan.