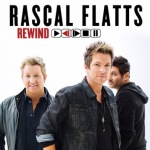 Rascal Flatts used to be the kings of pop-country, or what is now being called bro-country. As country music has shifted more towards a pop tune, Rascal Flatts has struggled to stay on top. Their latest release ‘Rewind’ features little to change that. It leaves listeners wanting more. Those that had hoped for a changing of the tide after their last album shouldn’t get their hopes.

The album opens with two upbeat tracks, ‘Payback’ and title track ‘Rewind.’ Both feature catchy choruses, but offer little substance. There’s a reason Rewind seems to have peaked in the middle of the country charts, and Rascal Flatts’ inability to connect with newer country fans is it.

The album continues with ‘I Have Never Been to Memphis’. The slowest track on the album also happens to be the best written.”I’ve been painting it by numbers, you’ve been splashing it on the wall, and I can see the colors running, lets me know just where to go after all yeah after all,” sings lead singer Gary LeVox. It’s nice to see the group still producing ballads in a time when they are becoming increasingly less popular. Assuming ‘I Have Never Been to Memphis’ is released as a single it will likely be the biggest hit of the album.

The remainder of the album is average at best. Songs like DJ Tonight and Night of Our Lives are filler tracks at best. When you have three or four bonafide hits on an album you can get away with filler tracks, Rewind has no such hits. The album is full of songs that would sound better live. However, Rascal Flatts hasn’t changed their concert setlist by more than a song or two in three years. Similar to their previous release, Changed, fans will never hear the deeper tracks of these albums live no matter how much they fall in love with them. As they have found out over their past two releases it’s very difficult to produce a complete album at this point in their career.

When Rascal Flatts was at their best their songs were upbeat and fun. They still consistently put on one of best shows in the industry. They’ll use this years show to push this album to the best of their abilities. Their biggest fans will defend the album, and their biggest critics will attack it with ease. However, ask this before judging: Does Rascal Flatts care? They could never release another song and they would still have five to seven years of major touring ability, before having to reduce their venue size. If they get one big hit off an album in the next few years that window extends by another year or two. Rewind is their attempt to find another hit. Did they succeed? Probably not, but that doesn’t mean Rascal Flatts won’t keep selling out stadiums and churning out albums.